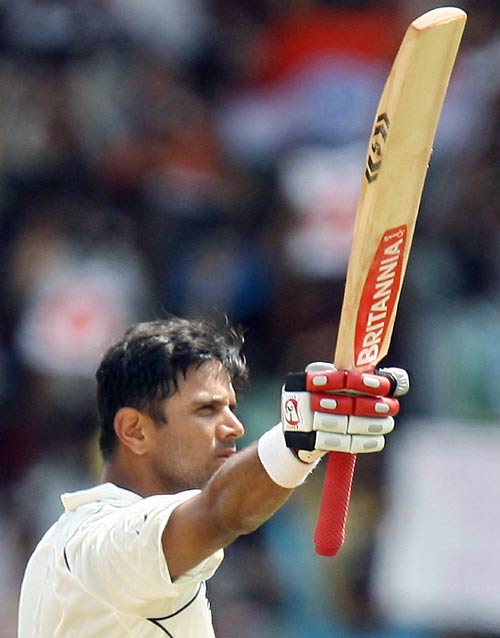 Whenever Rahul Dravid walked back to the pavilion after being dismissed in a match, a sense of disgust was visible in crystal-clear fashion across his countenance. It did not matter if he had made zero runs or 250 runs. He would always have the same expression on his face.
All batsmen hate to get out. But of all the batsman to have ever played the game, Rahul Dravid hated it the most. Indeed, he put such a heavy price on his wicket that he was rightly nicknamed ‘The Wall’ for his obdurate defence and no-chinks-in-the armour approach.
But the Dravid story really began in England in the summer of 1996 when he made his debut at Lord’s in the company of Sourav Ganguly. Both debutants had been drafted in to replace senior players and both were under immediate pressure to perform or perish.
The scintillating innings that Ganguly played to notch up a century on debut overshadowed a classy 95 by Dravid. That was to be the pattern of Dravid’s career for the next 16 years, for even if he top scored for his team, some other player usually drew more applause for a swashbuckling knock or a bagful of wickets. Thus though he won several man-of-the-match awards, perhaps he deserved many more.
Indeed this tendency to remain in the shadow of fellow players and to perhaps even relish playing second fiddle at times was typical of Dravid. He was quiet on the field and off it. A graceful, studious figure at all times, whether India was losing or winning. He did celebrate enthusiastically with his teammates when a wicket fell or when a victory was in the bag, but there was always a reserved, calm and collected manner about Dravid on the field.
His batting was out of the coaching manuals; not a fault was visible. Equally adept on the off-side and on-side, Dravid revelled in drives, flicks and cuts. He could also pull the ball capably and was never really dominated by the faster bowlers or the spinners. Even when the ball was seaming around, as it did during the summer of 2011 when he played his last series in England, Dravid scored a pile of runs amid the ruins around him. His bat was broader than any other, his foot-work as impeccable as that of a ballet dancer’s.
His most memorable knocks came when India was on the mat, often in the company of that another great of our times, VVS Laxman. Dravid took India to victory or to the safety of a Draw in many no-hope situations, but even he would admit that his match turning partnership with Laxman in the Kolkata Test match of 2001 against the Australians was his finest hour. The fact that VVS score 281 to his own 180 and the fact that VVS won many more of the accolades, never seemed to have hurt the great man.
His fielding was adequate but his catching was outstanding. He seldom dropped anything. To hold the world record for most catches in Test history when great fielders like Steve Waugh, Allan Border, Ricky Ponting, Shane Warne and Jacques Kallis played a similar number of Tests as him is a tribute to his superb ability as a catcher. Many blinders that he took at slip were off the spin bowling combination of Anil Kumble and Harbhajan Singh, and were invaluable aids to India’s march towards wins especially in home series. He even kept wickets for India in many ODIs and even in the 2003 World Cup in South Africa, a move that was highly unusual for a premier batsman. But then Dravid was Dravid all through his career; a quiet champion with the demeanour of a victor-ever magnanimous in praise of teammates and the opposition alike.
As a captain Dravid was highly successful, both in ODIs and Tests but the coaching stint of Greg Chappel took its toll on his captaincy without doubt. The dropping of Ganguly from the team was a shocking decision. Chappel was responsible but Dravid could have put his foot down as some skippers had done in similar situations before him. On the field Dravid was a clever captain, always in control and quite imaginative in his bowling and fielding changes. India won a record 17 successive ODIs under him at one stage and also vanquished Pakistan in Tests and ODIs on their home soil.
The memories are many. Sachin Tendulkar, with whom he had many brilliant partnerships, has rightly said that there is only one Rahul Dravid; there is none other like him. Dravid’s face off with the lightning quick Allan Donald in an ODI when he smashed the speedster repeatedly out of the park was goose-pimple stuff. His 270 and 72 not out at Adelaide in 2004 were magnificent efforts to take India to a long awaited win Down Under. The manner in which he raised his arms after stoking the winning shot would remain etched in memory.
If the first ball that he faced in international cricket was square cut with élan in an ODI long ago, Dravid’s last ball, his press conference at Bangalore to announce his retirement, was no less stylish.
We will miss the colossus that is Rahul Dravid. He was our own Mr. Cricket and more.

5 thoughts on “Goodbye Colossus! A tribute to Rahul Dravid.”